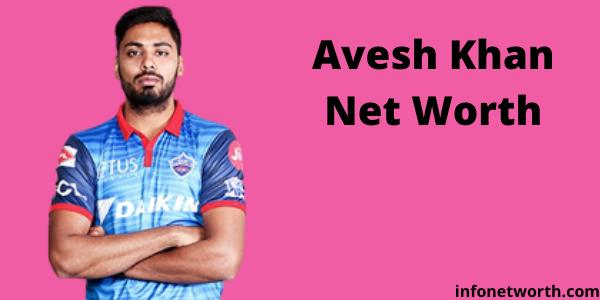 Avesh Khan is an Indian cricketer who majorly plays domestic cricket. He is a right-handed batsman and right-arm fast. Avesh made his domestic debut in the 2017 -2018 Vijay Hazare Trophy. And, he also played in India’s 2016 Under 19 Cricket World Cup.

The next year Avesh Khan name was listed in IPL Auction 2017 where he was bought by Royal Challengers Bangalore. In the 2018-19 Ranji Trophy, Avesh was the leading wicket-taker for his team. For his team Madhya Pradesh he did 35 dismissals in 7 matches.

Avesh has started playing in the Indian Premier League in IPL 2017 from Royal Challengers Bangalore. In IPL 2018, Delhi Daredevils bought him and from that year to IPL 2021 he is playing for Delhi Capitals (Name Changed). Check Avesh Khan IPL salary full stats are as follows.

Avesh has played in all formats, he played 26 First Class Cricket matches, 16 List A matches & 35 T20 matches. He has bowl 5775 balls in which he took more than 150 wickets in those played matches.

Avesh has scored one half-century in First Class Cricket in which he made runs at the strike rate of 60. Check his full profile mentioned below.