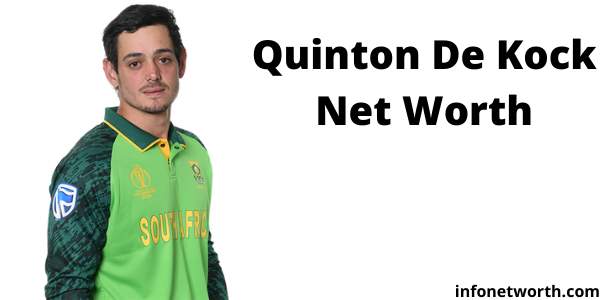 Quinton de Kock is a South African international cricketer and the captain of the South African team.  He is considered the best ope88ning batsman and the wicket-keeper in the world. In 2017, de Kock was named as the Cricketer of the year in Cricket South Africa’s Annual Awards. Quinton made his T20 debut against New Zealand in 2012. And, made his test debut in 2014 against Australia and his ODI debut in 2013 against New Zealand. Know more about Quinton de Kock Net Worth IPL Salary, Career, and more.

Started playing for IPL in 2013 with Sunrisers Hyderabad and Quinton de Kock IPL Salary was 10.65 lakh. After a great performance in the first season of his career, in 2014 he was bought by Delhi Daredevils with bidding of Rs. 3.50 Cr.
In IPL 2018, he was bought by Royal Challengers Bangalore. He was transferred to Mumbai Indians in IPL 2019. In IPL 2020 and IPL 2021, he was retained by Mumbai Indians. As of now, Quinton de Kock IPL Salary is Rs. 2.80 Cr while playing for MI.

De Kock is the opening batsman of Mumbai Indians which has been released in IPL auction 2022.  He has been bought by the new IPL team Lucknow Super Giants. Quinton De Kock IPL Salay is Rs. 6.75 crore which is more than compared to IPL Salary 2021.