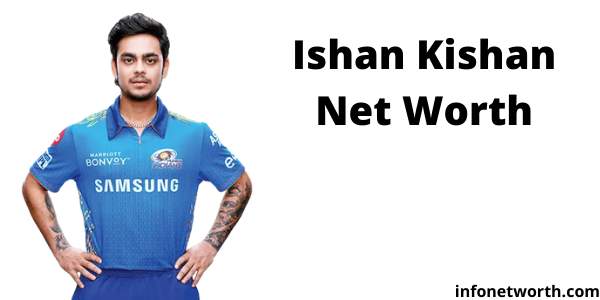 Ishan Pranav Kumar Pandey Kishan is an Indian cricketer who plays domestic and international cricket. He plays for the Jharkhand team and also played in the Under 19 cricket world cup. In 2015, Kishan was named as the captain of India’s under 19 cricket world cup. Ishan is a left-handed batsman and wicket-keeper. In March 2021 he made his international debut against England. Know more about Ishan Kishan IPL Salary, Career and Net Worth.

Kishan’s earnings have increased over the years. His main income comes from cricket and from sponsorship. In 2018, Ishan Kishan net worth is estimated at Rs. 50 crores to Rs. 65 crores. Indian Premier League has contributed a good amount of money to Ishan’s net worth. Apart from it, he also earns from sponsorship, recently he signed with CEAT tyres for Rs. 1 crore.

Ishan was again bought by Mumbai Indians in IPL 2022. He is the most expensive player in the Indian Premier League 2022. Ishan Kishan IPL Salary 2022 is Rs. 15.20 crores.

In 2018 he was named in the India C team in Deodhar Trophy where he has scored a century in the tournament final. In the 2018-19 Mushtaq Ali Trophy he scored an unbeatable century against Jammu & Kashmir. In the next match against Manipur, he has scored 113 not out runs where he recorded back to back centuries

In the international career of Ishan Kishan, he was invited to the Indian National team in 2021 to play T20I against England. He has scored 56 runs off 32 balls and got out as LBW from Adil Rashid. In that match, Ishan Kishan was the man of the match.

In 2021, he was named in one day international and t20I squad against Srilanka. He made his debut where he has scored 59 runs off 42 balls. In 2021 he was named in the India squad for the ICC men’s world cup.

Kishan has scored 5763 runs in 151 matches combined First-Class cricket, List A cricket, and T20. The profile of Kishan are as follows: