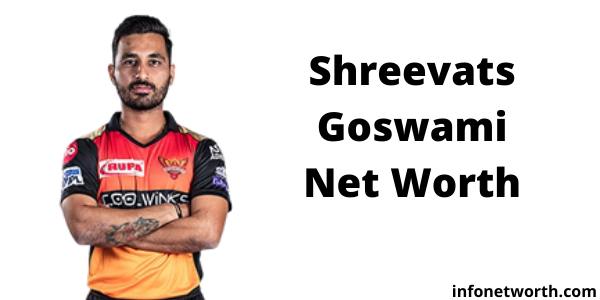 Shreevats Goswami is an Indian cricketer who majorly plays domestic cricket. He is a left-handed batsman and wicket-keeper. He made his domestic debut in 2008 from the Bengal team and also played in the Under 19 Indian Cricket team. Know more about Shreevats Goswami Net Worth, IPL salary, career and ICC Rankings.

Shreevats started playing in the Indian Premier League in IPL 2008 in Royal Challengers Bangalore. In RCB he played till Ipl 2010 then, in IPL 2011 Kolkata Knight Riders bought him. Later, in IPL 2013 he was transferred to Rajasthan Royals and played till 2014. From IPL 2018 to IPL 2021  he played for Sunrisers Hyderabad. Check Shreevats Goswami IPL salary is as follows.

Shreevats has played more than 200 matches and 6000 runs. Check his profile is as follows.