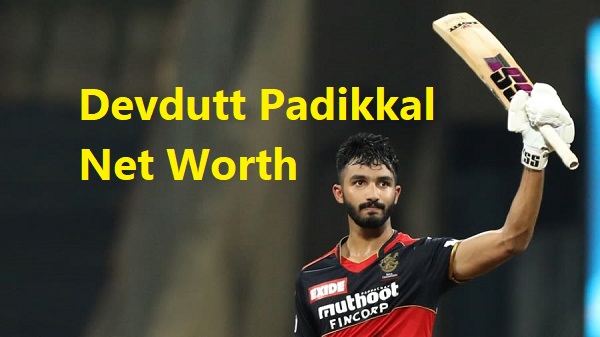 Devdutt Padikkal is an Indian cricketer who plays for the Karnataka cricket team. He is a left-handed batsman and a right-arm off-break.  Padikkal made his domestic debut in 2017 from the Bellary Tuskers team. Check Devdutt Padikkal net worth, IPL salary, career & ICC rankings.

Padikkal earns from domestic cricket and from the Indian Premier League. He gets paid by the Karnataka cricket association. Devdutt Padikkal net worth is estimated at Rs. 12 crores to Rs. 15 crores.

Devdutt has started playing in the Indian Premier League in IPL 2019 from Royal Challengers Bangalore team. From IPL 2019 to IPL 2021 he is playing for RCB.

Devdutt is one of the aggressive openers of the Royal Challengers Bangalore. He has hit a century and good scores in IPL 2021. In IPL 2022, he has good a good bid for his performance in IPL 2021 whereas in IPL 2022 Rajasthan Royals bought him. Devdutt Padikkal IPL Salary 2022 is Rs. 7.75 crore.

Padikkal began his cricket career in 2014 when he represented Karnataka in under 16 cricket. In 2017 he was selected by Bellary Tuskers in the Karnataka Premier League. He made his first-class debut in 2018 at Ranji Trophy. With his good performance in cricket, he was bought by Royal Challengers Bangalore in 2018.

In 2019, he made his List A debut in Vijay Hazare Trophy for Karnataka. He was the leading run-scorer in the tournament with 609 runs in 11 matches. In the same year, he was named in India A squad for Deodhar Trophy. He made his T20 debut in the same year in Mushtaq Ali Trophy.

In 2021, Padikkal got a. opportunity to play in the Indian national team. He was named in ODI and T20 against Srilanka